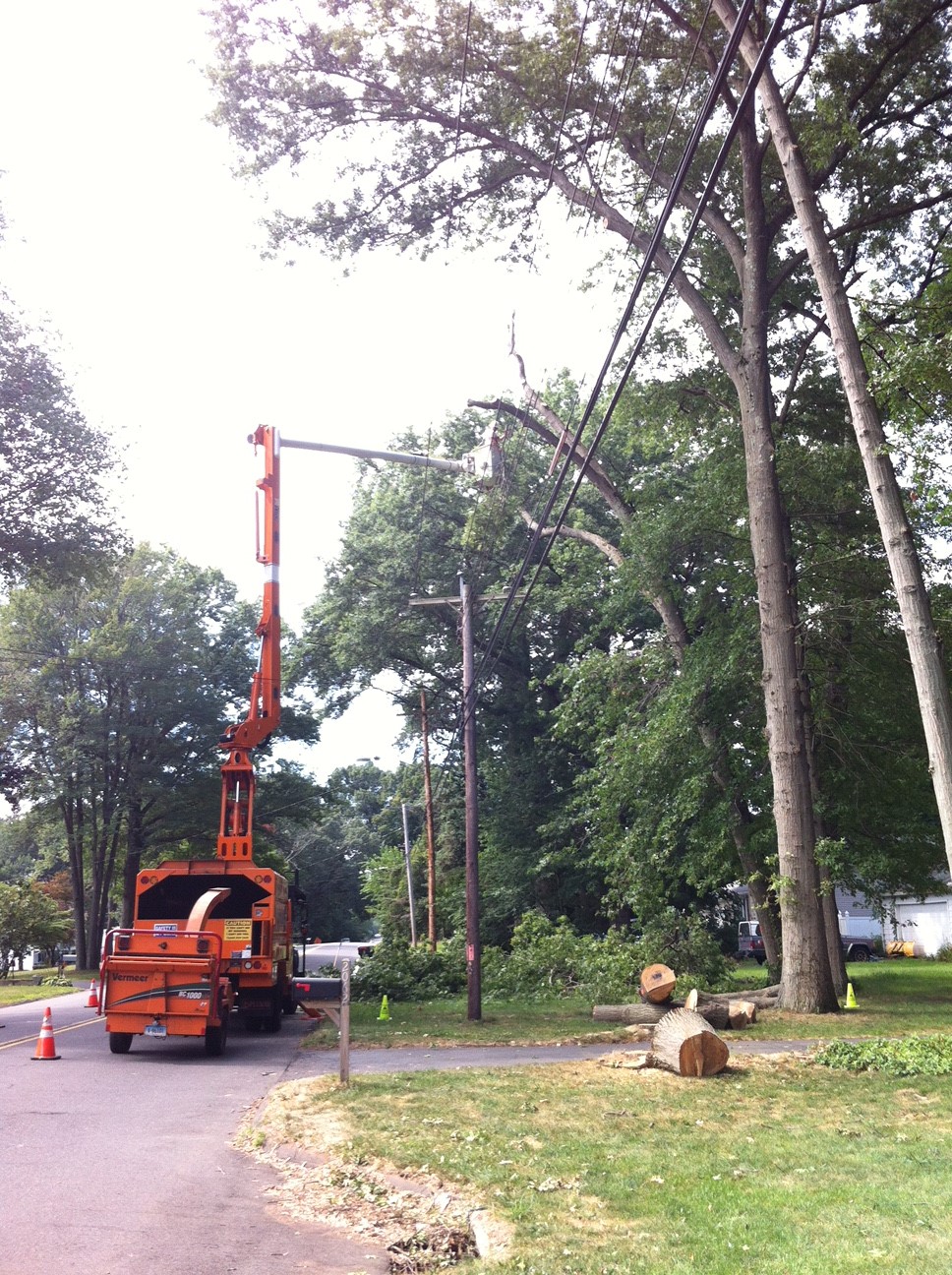 More Information Can Be Found on the Stormwise Site.

In traditional tree cutting routines, logs are removed and sent to waste management. Ideally, a wood recovery initiative would sell the logs to wood companies with sufficient revenue to pay for the costs of cutting and send the remainder revenue back to the towns for the purposes of tree planting. The success of this business model depends on many factors including costs of transport from the cutting area to the wood companies, the fraction of wood that the homeowners want to keep and the quality of the wood. How these different factors play out in the Eversource Energy service territory in Connecticut is being studied by Danielle Kloster, a Ph.D. student in Natural Resources and the Environment at UConn and her partners in the Stormwise project.

The wood recovery pilot program was launched in collaboration with United Illuminating and Eversource Energy and is a joint effort with the Stormwise’s vegetation management team. Its initial launch took place within the two towns of North Haven and Haddam. In the fall of 2014, the vegetation management teams were finding that as the tree removal teams were doing extensive removals, they were cutting down a significant amount of trees that could be used for a higher purpose. There was, then, an initial discussion on the startup of pilot programs, in which Kloster chose to focus her part on how the tree crews would be affected by its implementation.

Kloster began her research by structuring the program based around ideas in which she saw to be most important to the pilot program’s success: how it impacted the workers’ daily flow, an understanding of normal operations, and overall opinions from the ground. Thus, Kloster conducted a series of interviews with tree crews in the past two years, both involved and uninvolved with the pilot program.

The biggest challenge with any qualitative research is that who you are as an interviewer may impact the results. Kloster focused largely on gathering unbiased answers by making the tree crews aware that this process was an evaluation for the pilot program and that Kloster herself had no effect on the programs’ continuation. The goal was for the tree crews to be objective in their assessments.

The initial round of interviews helped in shaping the program moving forward. When the pilot program first launched, Eversource was training crews to remove as many logs as possible out of the trees. This systematic approach turned out to be impractical as it arose a set of safety and time concerns. This feedback, gathered by Kloster, was then used to shape the program’s strategy to cutting down the rest of the tree until the butt log, the trunk of the tree closest to the ground. This allowed safety to be the first focus and dramatically simplified the process to fit much more smoothly into the workflow.

The biggest idea that Kloster got out of her research was the importance of talking to forces on the ground. She found that individuals were genuinely excited about the program. A lot of the tree crews were supportive because they felt that their feedback was being taken into consideration and they were given the opportunity to give back to the community.