Offshore wind is an abundant energy resource with significant environmental and economic benefits, but as a natural resource, it is variable. At the Eversource Energy Center the Marine Boundary Layer Modeling project aims to improve the design and operation of wind farms by better characterizing meteorological conditions at the wind-farm scale.

We are currently developing a high-fidelity, high-resolution computational model that is capable of simulating the atmospheric motions around individual wind turbines. To model the flow in the wind farm, we are extending UConn’s Large-Eddy Simulation (LES) model to include wind turbines. LES models are high resolution atmospheric models capable at simulating the wind, thermals, and clouds at spatial scales of a few meters. The newly developed model is able to capture the interaction of individual turbines with the turbulent atmosphere. The new model will allow us to investigate the dependence of overall power output on the environmental conditions and the characteristics of the wind farm, such as the type of wind turbines and their relative positioning. 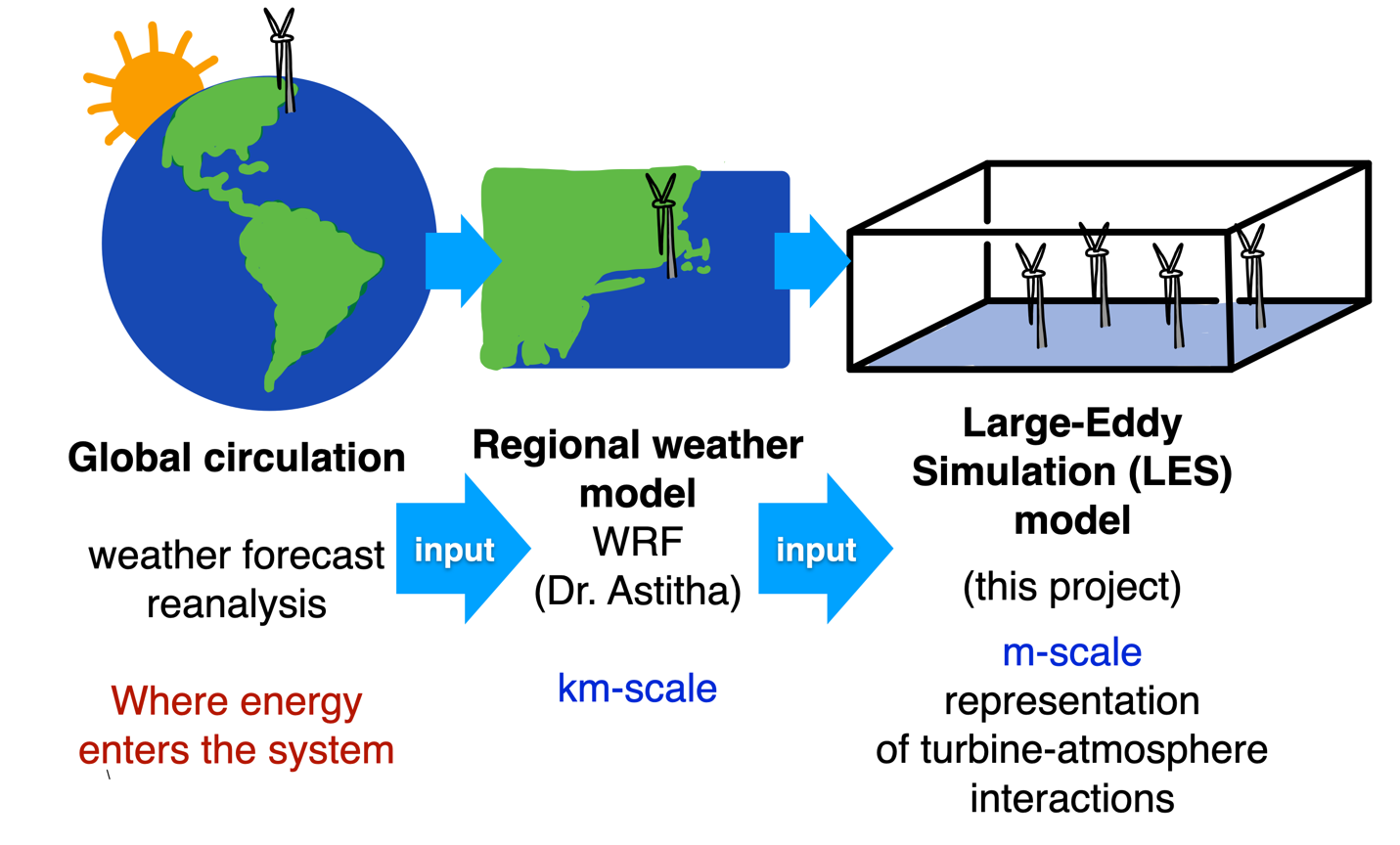 A comprehensive modeling system is developed to capture the energy flow through the atmosphere. Energy initially enters the system by differential solar heating of the Earth’s surface. Regions near the equator receive more radiant solar heating compared to the regions near the poles. The energy enters the atmosphere through direct heating of the air at the surface and through evaporation in the form of latent heating of the atmosphere. This spatially variable energy flux drives the large-scale atmospheric circulation, weather patterns, and eventually the wind field at the location of the wind farm. Design and operation of the wind farm depends on the details of the wind field at small scales (less than 100 m) and near the surface. Modeling of the entire atmosphere at fine scale is not feasible. Thus, a hierarchy of modeling methods is used to track the energy flow through the system.

Numerical weather predilection (NWP) modeling of the entire atmosphere provides information about the global weather patterns. NWP modeling is typically performed by government agencies and the model output is available to researchers. The output of the global model is used as input to a regional weather model which captures wind patterns at smaller scales (about 250 m). Subsequently, the output of the regional model is passed to the LES model that includes the interaction of the wind field with the wind farm. Through this modeling sequence, we are able to produce realistic predictions of energy output and the gather critical information related to equipment maintenance operations.

The wind turbines are converting the kinetic energy of the wind field to electrical power. Similar to the experience of a “bumpy” flight, the turbine blades move through a constantly fluctuating wind field. The fluctuating character of the wind field, or the characteristics of atmospheric turbulence, are important for the efficiency of energy extraction and the structural fatigue of the turbines. Accordingly, the accurate representation of atmospheric turbulence is important in the LES model. The model uses a sophisticated technique to generate a turbulent atmosphere upstream of the wind farm by using a pair of concurrent synchronized LES simulations. An auxiliary LES is carried out to generate a realistic turbulent atmosphere. Data from the auxiliary LES are used as an inflow condition to the main LES which includes the wind farm.

The following figures show results from the main LES domain. The locations of the wind turbine disks are indicated with black lines. Movies correspond to a horizontal plane at the hub height and a vertical plane along the turbine axis. The color contours correspond to wind speed. The wind speed downstream of the wind turbines decreases as a result of the reduction of the kinetic energy as the atmosphere moves through the wind turbine. Essentially, the plots visualize the extraction of kinetic energy from the atmosphere. Also shown is the importance of atmospheric turbulence as small fluctuations interact with the turbines but also the interactions of the wakes between the turbines. For closely placed turbines as in the figure, the placement to reduce interference of the wakes with the downstream turbines is important because the wakes are regions of low wind speed, thus, less energy can be generated.