Scientists and engineers must take greater account of human perspectives in their projections if society is to avoid collapse from climate change, a prominent meteorologist and professor of atmospheric and oceanic science recently told UConn engineering students and faculty. 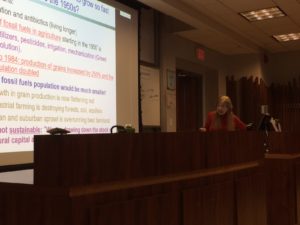 The April 13 visit of the University of Maryland’s Distinguished Professor Eugenia Kalnay was co-sponsored by the Eversource Energy Center (EEC) and the Environmental Engineering Program (ENVE) to coincide with UConn’s Metanoia, a university-wide initiative on the environment for Spring 2018. Kalnay, who in 1971 was the first woman to receive a doctorate in meteorology from MIT, today serves on the Scientific Advisory Board to the United Nations and is a recipient of the International Meteorological Organization Prize (2009), among other important honors in her field. Widely regarded as a weather science pioneer, Kalnay is one of the originators of HANDY (Human and Nature Dynamics), a model representing the interaction of human dynamics and the environment that prompted controversy when first published in 2014.

In an informal discussion with undergraduate students in the ENVE’s Environmental Modeling class, Kalnay cited the unsustainable rate at which human population is growing, which will soon result in consumption exceeding what natural resources can produce. This kind of demographic explosion has led to repeated collapses of societies throughout history, Kalnay said, and the Earth’s climate and environment are now more sensitive to human decisions and policies than in the past, when populations were much smaller relative to the available resources.

In a later round table discussion and a seminar entitled “Modeling Sustainability: Need to Couple Earth and Human Systems Models,” Kalnay explored with EEC, ENVE and Atmospheric Science Group (ASG) faculty and graduate students the chronological advances in modeling, from the purely atmospheric to the fully coupled multicomponent Earth system models, that form the scientific basis on which the Intergovernmental Panel on Climate Change (IPCC) generates climate change scenarios. Despite being so comprehensive, the models are not yet fully coupled with human models, Kalnay said, which could have large impacts on climate projections.

The seminar ended on an optimistic note, as Kalnay presented possible future scenarios in which intelligent geoengineering experiments are carried out to harness solar and wind energy to completely replace fossil fuels. In the Sahara Desert, she suggested, such efforts could potentially increase vegetation and reverse the desertification trend toward a greener region in the tropics. Estimates from her team’s model indicate this is feasible, she said.